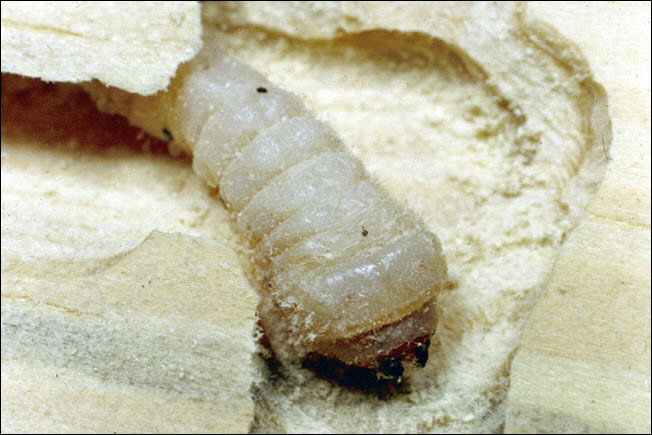 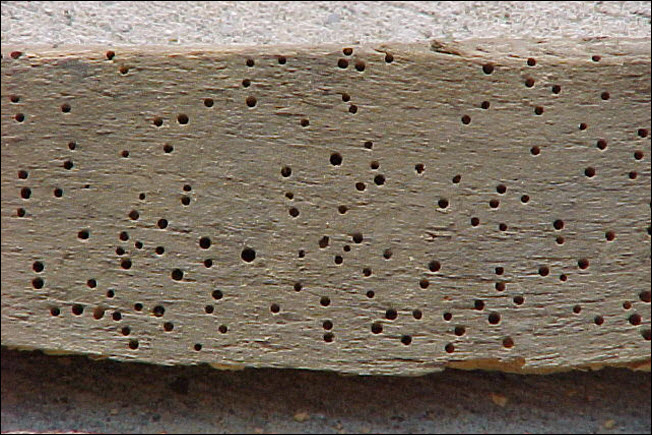 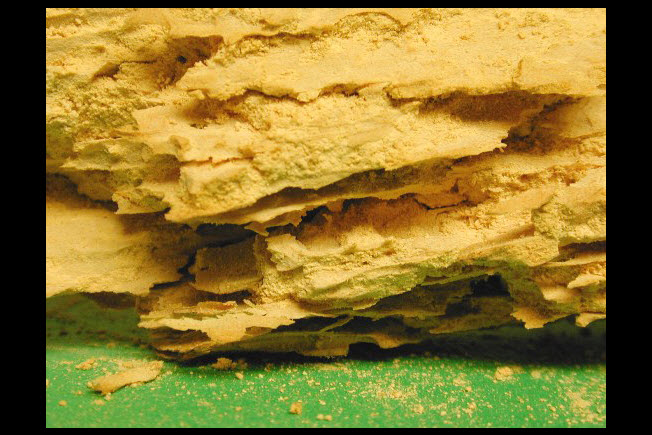 Powder Post or Lyctus Beetles – Powder post beetles attack both freshly cut and seasoned hardwoods and softwoods. They attack the sapwood of ash, hickory, oak, and other hardwoods.

Adults lay eggs in the wood pores. The larvae burrow through the wood, making tunnels form 1/16- to 1/12-inch in diameter, packed with a fine powder. after a larval period (from a few months to a year, or longer – depending on the species) and a much shorter pupal stage, newly formed adults chew holes through the wood surface and emerge to lay eggs for another brood. Signs of damage by powder post beetles are:

Anobiid beetles – may attack softwoods in damp and poorly ventilated spaces beneath buildings. Eliminating the source of moisture will cause the colony to slowly die out.

Roundheaded Borers – A longhorn beetle, commonly known as the old house borer, damages seasoned pine timbers. The larvae bore through the wood. Over many years their tunneling can weaken structural timbers, framing members, and other wooden parts of buildings. Contrary to its name, the old house borer most often infests new buildings. It is found in the Eastern and Gulf Coast States.

Larvae reduce sapwood to a powdery or sawdustlike consistency. They may take several years to complete their development. While working in the wood, they make a ticking or gnawing sound. When mature, the adult beetle makes an oval emergence hold about 1/4 inch in diameter in the surface of wood.

Flatheaded Borers – Flatheaded borers infest live trees as well as recently felled and dead, standing softwood trees. They can cause considerable damage in rustic structures and some manufactured products by mining into sapwood and heartwood.

Typical damage consists of rather shallow, long, winding galleries that are packed with fine powder. Adults are often called metallic wood-boring beetles because of their color. They are about 3/4 inch long, with wing covers usually rough, like bark.